The meaning of catharsis and its Aristotelian use in his celebrated definition of tragedy (Poetics 1449b24-28) have been debated for centuries, prompting a wide range of interpretations. In fact, the exegetic history of Aristotle’s Poetics shows peculiar features, including its having been recurrently assumed as the reference and foundational point of aesthetic and dramaturgical theories. Also owing to the incompleteness of the transmitted text, the interpretation of different passages has been bent to fit diverse aesthetic needs. This issue gets far more complicated when one comes to consider the catharsis, also because over time it has undergone a double decontextualization. On the one hand, the whole treatise on poetic art has been taken out both of its original cultural milieu and the Aristotelian corpus, and on the other hand, the formal definition of tragedy has been isolated from the rest of the Poetics. This has inevitably favoured the overlapping of religious and spiritual interpretative categories calling into cause atonement and redemption of the soul, as well psychological ones, involving sublimation and ennoblement.
As a consequence, many scholars – despite its unfinished and rather fragmentary formulation – have concentrated on that definition taking it as a starting point in order to crack the code of Greek tragedy and of the ‘tragic’ by reading the former as a historical fact and the latter as an aesthetic and existential category. Besides, the Katharsis-Frage did not embrace only philological and classical antiquity studies, but also literary ones in a broad sense, as well as dramaturgical practices and aesthetic and philosophical interpretations. Thus catharsis has eventually become the most famous concept in the whole of Aristotle’s Poetics, it has been used as if its meaning were self-evident and raised to the status of antonomastic concept of the entire Aristotelian dramatic theory.
The manifold exegetic models that the hermeneutical tradition has devised, starting from Renaissance treatises until the present, contradict each other and none appears to be completely satisfactory nor free from internal inconsistencies. However, rather than comparing these models or trying to concoct a new one, modern scholars should more sensibly investigate single issues whose peculiarities may illuminate the whole problematics. Among the aspects that appear to be still worthy of a close reappraisal one may select the meanings and uses of the term katharsis in Greek archaic and classical culture before Aristotle’s poetic classification and its successive treatment within the different traditions. This reassessment can lead to the exploration of the origins and connotations of the term in medical lore which, according to Jacob Bernays’s nineteenth-century well-known interpretation, endowed the tragic spectacle with therapeutic effects. Other unresolved issues are the relationship between the notion of catharsis drafted in Poetics 6 and the musical one (of pure entertainment and without any educational aim) of Politics 8, along with the possible existence of a specific cathartic outcome in comedy – whose assumptions and consequences are different from tragedy’s. Another interesting line of inquiry would be to verify to what extent extant Greek tragedies may produce effects of ‘pity’ and ‘compassion’ as well as the ‘catharsis’ of such emotions: the point is to understand to what extent Aristotle’s theory is truly adequate to describe and help to comprehend tragic texts.
Looking at the modern age, fresh research has neither thinned out nor proved less engaging from both a historical and theoretical point of view. A fruitful line of inquiry, for example, can be detected in the way Renaissance treatise culture absorbed the category of catharsis by mixing and overlapping different levels (dramaturgical, ethical, musical, psychological, etc.). Another issue deserving attention is the influence of Aristotle on Shakespeare’s drama. To what extent can the emotions raised in Elizabethan and Jacobean audiences be related to the categories set out in the Poetics (which had long remained unknown in Britain)? And through whose mediation did that happen? Later on, Goethe and Lessing introduced two different ways of understanding the concept of catharsis, and both were fairly successful; nevertheless, neither their theoretical implications nor their actual use in drama have been appropriately scrutinized.
Friedrich Nietzsche – a revolutionary interpreter of Greek tragedy, in his own way – formulated a theory of the tragic in which the ‘Dionysian’ effect of ecstatic dissolution seems to substitute the traditional one of purification or sublimation of emotions. In the wake of Nietzsche’s interpretation, the topic of theatrical catharsis was hotly debated in Vienna between the nineteenth and the twentieth centuries until Hermann Bahr’s theorization of the therapeutic function of theatrical spectacle precisely by virtue of its ‘cathartic’ effects (Dialog vom Tragischen, 1904). Finally, further research opportunities may also come from the analysis of the application of catharsis to some of the most important twentieth-century dramaturgical experimentations, such as Bertold Brecht’s estranging epic theatre (which rejects catharsis as the dissolution of the emotional tension leading to the spectators’ satisfaction and stasis), the Living Theatre, and Antonin Artaud’s Theatre of Cruelty. 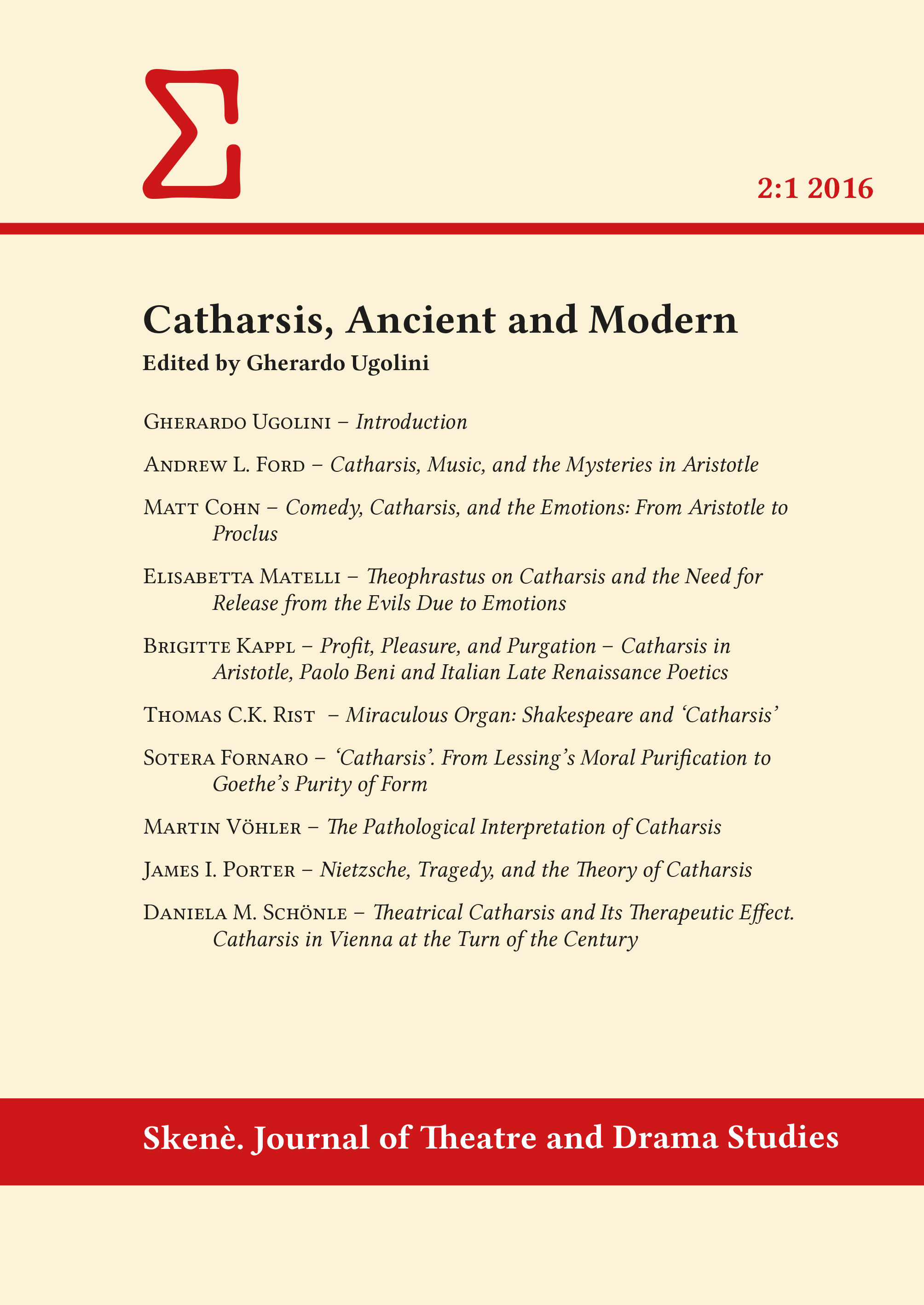